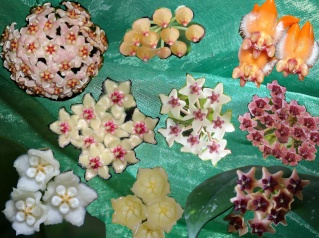 ‘Argentea-Picta’ (Trademark name, ‘Silver Princess’) – This Latin name was given it before the Code was written.

‘Bold One’ (A Genevieve McDonald cultivar).

‘Convovulaceae’ (A name given to a cultivar of Hoya carnosa variegata having smaller, slightly twisted leaves, by the owner of Loyce’s Flowers’ in the 1970s. I have found the cultivars ‘Holliana,’ ‘Marlea’ and ‘Divan’ to be indistinguishable).

‘Cream One’ ( A Genevieve McDonald cultivar, also called ‘Lime Cream’ and ‘Lime Green,’ but only by people who can’t keep their facts straight).

‘Darling One’ (A Genevieve McDonald cultivar).

‘Dimples’ is a made up name, put on labels by an Ohio grower (no longer in business) who wanted to avoid paying royalty to Cobia. The man was so brazen, he bragged of doing this (in public). This is Hoya cv. Krinkle-8.

‘Divan’ (A dwarf Hoya carnosa var. variegata. I see no difference between this and cv. Holliana. If they aren’t the same cultivar, they have to be from the same cross).

‘Green Exotica’ (When cv. Rubra reverted, the owner of Loyce’s Flowers cut the green parts out; rooted them and sold them as cv. Green Exotica).

‘Holliana’ (A dwarf form of Hoya carnosa var. variegata. I see no difference between it and cv. Divan).

‘Krinkle-8’ (A Cobia introduction; looks like it could be a tetraploid; thick leaves & stems with 8 dimples on them).

‘Little One’ (A Genevieve McDonald cultivar that grew up after it got named and distributed. It is huge for a carnosa).

‘Little Leaf’ (Another Genevieve McDonald cultivar. It’s not a miniature but looks like a ‘Krinkle-8’ that didn’t take its vitamins – a bit stunted in growth).

‘Little Star’ I’m unfamiliar with this one.

‘Pixie Krinkle’ (A true miniature version of cv. Krinkle-8. I do not know the source but I got mine from Stu Cramer of Ft. Lauderdale, FL. Stu said he got it from Glasshouse Works. I don’t believe they have it anymore).

‘Quiescent’ (Source not known. I can’t distinguish between it and Hoya carnosa. My source said she couldn’t either but she said, “I sell them with the labels that were on them when I got them.” Good ole buck passing excuse for mislabeling).

‘Snow Ball’ (a misnomer – flowers are huge and very pink, not white as tooted.).

‘Snow Fire’ (I believe this is cv. Snow Ball. I say this because I sold ‘Snow Ball’ to the only dealer I know of that ever listed the name ‘Snow Fire.’ When I bought it from him, it appeared to be the same).

‘Superba’ (Although this has been in trade for at least 40 years, I believe that it and ‘Snow Ball’ are one and the same.

‘Susie Q’ (Source not known. Not much different from all the rest).

‘Sweet One’ ( A Genevieve McDonald cultivar with the most delicate, purest pink flowers of all the Hoya carnosa cultivars I’ve seen).

‘Verna Jeannette’ (This is a better behaved ‘Silver Princess.’ Named, I’ve heard, for Mr. Cobia’s mother). He did not patent this one.

‘Waffles’ This is cv. Krinkle-8. Same Ohio seller who made up the name ‘Dimples’ for the same cultivar is responsible. He bragged of it in public.

‘Wilbur Graves’ (Broad motoskei-type leaves but often with half or more of the leaf white in an irregular pattern.

‘Gringle Curl’ (Same dealer catalog a year later shows this name. She changed it when I told her the Crinkle was wrong. I did not supply the name Gringle. That was her own idea). This is cv. Krinkle-8.

‘Mauna Loa’ (trademarked Lura Lei and most often mislabeled as Laura Lee, Laura Loa, Mona Loa and Mona Laura – in other words, if hoya growers can find a wrong way to spell it, they’ll do it)!

‘Picta’ (Made up cultivar name, given to cv. Mauna Loa by a Fresno, CA hoya seller who couldn’t keep his facts straight)!

‘Regalis’ (mislabeled on internet as ‘Variegata,’ ‘Variegated’ and ‘Krinkle.’ The names, Indian Rope, and Hindu Rope have been applied to this by sellers who make up names for anything new to them. It’s less trouble than learning the right name and often more lucrative (i., e., if they used the right name, they couldn’t sell it because all their potential customers know they already have it).

‘Tove’ is the name given to a mutation on Hoya compacta. It differs from others in having silvery splashed leaves. I’ve been told that it has been circulating in Sweden for several years.

‘Compacta Variegata’ (A made up name for cv. Regalis by a Fresno, CA hoya seller who couldn’t keep his facts straight).

‘Tove’ is the name given this mutation that appeared on what someone thinks is Hoya lacunosa., but probably isn’t. I see nothing in the Code for Cultivated Plants specifically prohibiting the naming of two cultivars with the same name when they belong to different species but I think that “goes without saying.” But I guess that some things have to be spelled out repeatedly for some people to get it.. This one is said to differ from the norm in having a dark, copper tinted leaf and light rose coloured flowers. Growers tell me that they’ve grown it for several years and have seen no sign of it reverting.

‘Lida Buis’ is a variegated form of this species, having green margined leaves.

‘Luis Buis’ is a variegated form of this species, having white margined leaves, or so I’ve been told.

‘Albo-marginata’ -- another illegal name for a cultivar. I suspect it is the one above that someone

thought was something new..

‘Dapple Gray’ (I place this here though I’m not certain it belongs. Ms. Andrews who distributed it, labeled a pink flowered carnosa with this name in the picture book she rented me but all the flowers I’ve seen so labeled have been purple.

‘Fresno Beauty’ (Kloppenburg named this for his home town).

‘Grey Lady’ (I’m unfamiliar with this cultivar – I suspect it’s from England – the way gray is spelled is what gave me that notion).

‘Jungle Green’ (No such as far as I know– I suspect that someone just couldn’t think of Jungle Garden and started calling it Jungle Green – lot of that going around)!

‘Leenie’ (named by Dr. James Broton for his wife, Eileen).

‘Pink Silver’ (the best of the best – a Hummel creation).

‘Pretty One’ (????. I question this because I once rented Ms. Loyce Andrews Hoya Photo Album. She showed this as a pink flowered Hoya carnosa look alike. The one she sold me had pink flowers too, however, everyone else I ever heard of who got a ‘Pretty One’ from her got a plant with ‘Pink Silver’ look-alike flowers with broadly ovate leaves.

‘Reva’ (Kloppenburg named this for his mother).

‘Silver Leaf’ (similar to ‘Pink Silver’ but with rounded leaf bases and not as much silver speckling).

‘Silver Knight’ ( Seen by me only on a wholesaler’s price list – turned out to be cv. Pink Silver).

to be the same plant--holesaler even admitted to the truth).

‘Red Masterpiece’ (Another from Miyashiro).

might be the full name of one listed by Kloppenburg simply as ‘Rainforest.’

very like those of the Hoya subquintuplinervis X Hoya pottsii cv. Christine in flower but the leaves

are quite different. See below.